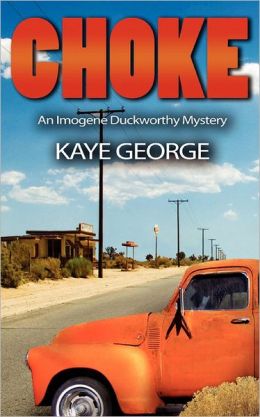 Book Description
Twenty-two-year-old Imogene Duckworthy is waiting tables at Huey's Hash to support her toddler daughter in tiny Saltlike, Texas, and just itching to become a private eye like the ones she admires on TV. When Huey is found murdered, she gets her chance to solve a real case ... but when Immy's mother is hauled in for the crime, the spunky waitress finds herself on the lam from the law.

My View a book review!
The first mystery novel in the Imogene Duckworthy series, followed by Smoke and Broke was nominated for Agatha Award in the Best First Novel of 2011 category.

This book is author’s dedication to her Mom, and I feel it links to the character of Mrs. Hortense Duckworthy. Aren’t all characters real life regular people having past and history?

Mrs. Hortense Duckworthy is a true three dimensional character throughout the book, with her unique vocabulary, a distinct trait, having specific emotional sensitivities related to her past, all really well portrayed by the author. She maintains her dignity through the good and the bad, experiencing the highs and lows with a unique emotional equilibrium.
As a reader I almost got attached to her and felt empathetic by the time I finished reading the book!
Though, the main character of the book is 22 year old Imogene Duckworthy or Immy, it’s mesmerizing to see the connectivity and contrast between these two characters, some places they complimented each other and different  times seemed completely opposites.
Immy, Hortense and Drew (Immy’s daughter) together portrayed a beautiful family like any real one facing difficulties and triumphs.

Is this not an omnipresent real life phenomenon we experience in our relationships all around?
Hence this is a book for everybody!

There are not many dark and horrible secrets about Immy, except for her desire to become a private Investigator, like her father was. This single point of connectivity with her father drives her actions throughout the novel. It’s touching to see how she gathers gratification moving towards her dream.

The mystery character of Guido Giovanni adds lot of suspense to the story. I liked the far off approach author has adopted. It’s really interesting witnessing how he is entwined in the story at different places yet maintaining own space.

Baxter Killory seemed a villain at most times but the interesting turn of events makes it impossible to judge the character till the end.

Clem, the cook at uncle Huey’s restaurant, added action throughout but his personal traits were not really seen and that adds to the mystery element.

Officer Ralph a relatively dormant character in the beginning acquires the center stage, through a sequence of well-connected events.

The author has done an exemplary task of making the surroundings come alive; there is history and pictorial description of places.
My favorite lines, writer's view of the city- Whymee Falls, made it appear like I could see a section of it through her writing,
“It had multiple restaurants, but most of them were steak places with a few chains. It had a shopping center, but one of the two anchor stores had moved out ten years ago. It had quite a few strip shopping centers, but only about two-thirds of them were occupied………..”

It is interesting how the main character Immy connects with other characters at unexpected places this really makes it a true mystery, for example, Xenia met with a car accident and was unconscious Immy knew  she was at the restaurant after her mother left, so she suspected her intentions and had to meet her to find out. Disguised in a new wig and some makeup she made it to the hospital and met Frankie Laramie who identified her through her disguise, provided vital clues which would help later to figure out the murder mystery of uncle Huey. She also suspected Frank. Author has artistically linked so many occurrences in one scene; this makes the book even more appealing.

There is a touch of poetry in language; makes reading the book pleasurable and wholesome.
“The streets were empty tonight. That was a break, at least. The drowsy chirp of crickets sang them to the door. Far in the distance, a pack of coyotes yipped. Immy looked up and saw a full moon, its pale radiance filtered through the branches of the huge live oak in Clem's front yard.”

It’s got fun wrapped between captivating events, my favorite part when Immy got stuck in the hospital cupboard disguised as a fat lady wearing funny clothing. The description and the way the event unfolds are really facetious. Author has cleverly sequenced it at a crucial place which makes it engrossing.

It is a beautifully woven story, so many characters all blended into a mystery. Yet amazingly all have a place and identity. This book is a good read, very entertaining; I enjoyed it and would recommend it to everybody. It surely is a decent buy!!
For a debut novel it’s amazing! 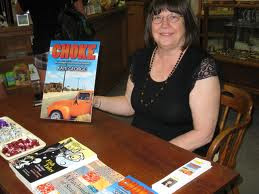 Choke is her debut book, broke a many barriers for an Indie author!
Her diverse background working as a janitor in a tractor factory, a mental health center secretary, a bookkeeper, a short order cook and a mainframe computer programmer, a nurse's aide. Not much exposure to enhance her writing skills makes one appreciate her talent more. 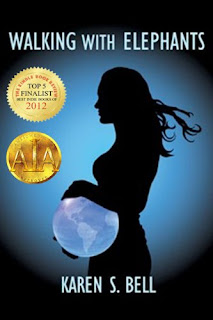 A women centrist book as it seemed to me initially but as my journey progressed deeper into Suez Halls chaotic life I was compelled to change my mind, it is an exceptionally good read for men and women equally, it helps to truly understand the life of a modern woman, super mom, Juggling personal aspirations, career professional life and the responsibilities of being a mom to kids, a wife and still smiling living.

There is more to a women’s life then what is evident apparently, deeper self-searching side which usually is ignored or not explored. Author has beautifully disguised these aspects of a women’s personality subtly between the daily life scenes of Suez’s life.

I completely related with this piece from the book:
“What if along with this visibility, the role of mother was considered just as vital; just as important? What if motherhood was a valid experience to put on a resume? What if telecommuting made it possible to stay at home and be an executive? What if women could put their children in schools near their work? Nursed them in their offices? What if women were given a paid maternity leave of two-years so they cold imprint their moral character on their children and still keep their jobs? . . . . And countless other innovations that would be created from women’s needs and wants?”

Author is adroitly asking some very deep questions. These are today’s global issues related to gender inequality. Yes we have moved away from the basic yet the primary issues dwell. The issue of child rendering, cooking etc. still considered to be a woman’s domain, what has changed is that now she is also equally responsible for providing financial support. The story of this book revolves around these issues.

The challenges of a women have not changed they still remain!

Suez Hall is the protagonist, a woman struggling to balance all aspects of her life. Elliott is a dependable male-gay coworker who successfully reached the status of being a friend in Suez’s life. Marcia is her unmarried best friend - a soothing balm amidst the disarray of her busy life.

I was greatly humored by the author’s sense of humor there were multiple occasions while reading this book where I was more than smiling.

Discreetly hidden philosophy is another aspect of this book that I liked truly!

The story has quite a few side characters,  Harry Binder is Suez’s boss a moderate villain like all regular real life boss. Author’s description of his character makes him a cruel interesting piece to read there was a point when I secretly felt sorry for him.

It is amazing how as a reader I was feeling for the characters. In a way experiencing what the author wanted to make the reader experience.

The name of the book completely correlates with the story and this you will realize after reading it. It is a great book to read for all.

A poetic expression that comes to me after reading this great read, my mind says:

This book seemed like it was my story, written with deep insights similar to what I found deep inside.

I am not surprised that it is a TOP-5 FINALIST in the Kindle Book Review's Best Indie Books of 2012 and is awarded the AIA Seal of Excellence in independent fiction by Awesome Indies, I feel the subject has great potential and the author failed to take complete advantage it did not reach the next level. This is a great read but has an exceptionally great potential to become the best books on women’s life.

The casual writing style I think an imprint from author’s earlier professional roles, (she was mostly writing light conversational pieces as a celebrity interviewer and as a critique) makes the subject of the book sound not so serious.
I would however advocate for a more mature writing style!

The storyline is simple but the content and the way the author has used her skills to bring out the hidden meaning of daily life occurrences in a woman’s life. Her view is great on a lot of issues. The insightful comments make you wonder and ponder over the thought.
I would say this could have become the best book everybody’s read! 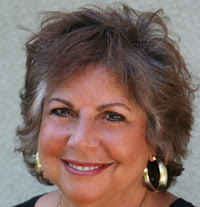 Karen S Bell wore many hats and has evolved to be a writer she was a theater critic and celebrity interviewer for a weekly tabloid in Jacksonville, Fl. She was also an editor/writer at a major accounting firm, and technical editor for a monthly accounting magazine!

Holds a Master’s in Mass Communication from Oklahoma State University, an ardent observer of life and has a keen eye for feminine values this is demonstrated through her writing specially this book. Her approach to human challenges is unique. She continues to search for answers in the mundane as well as in the cosmic forces that surround us. She is working on her third novel and lives in Ponte Vedra, Fl. with her husband and their two lovely kids.